With a passion for cinematic screen stories and an empowered business model, Hatherley quit advertising at the top of her game and established La Vérité Films in order to developed her craft as a long form writer while producing three significant short films.

Her first short film, Just Do It, won an IF award for best short film before screening internationally. Her most recent productions were the Tropfest comedy, The Birth, and psychological thriller Lost Soul which premiered at the prestigious Sitges film festival in Spain. La Vérité Films also produced a high end trailer / proof of concept for Sarah’s planned debut feature film, Hunted when Hatherley unearthed the story that would become her first crime drama mini series.

Sarah’s pilot script for Use Of Force was a finalist in 2019 Final Draft Big Break International Screenwriting competition. And attracted strong market interest before Melbourne’s long COVID lockdown in 2020 caused Sarah to pivot.

Armed with hundreds of hours of intimate and gut-wrenching phone conversations with the whistle-blowing female ex-cop at the heart of Use Of Force, Sarah enlisted the assistance of co-producer  and podcast devotee, David Curry, to craft a powerful true crime podcast which has found huge success and garnered Hatherley a nomination for Spotify Rising Star at the 2021 Australian Podcast Awards.

With podcast audiences keen to see the story reach the screen, the TV series has taken a leap forward in 2021 with Hatherley joining forces with industry heavyweight Mark Fennessy to develop the 6 x 1 hour elevated crime drama series.

Her other feature film screenplays include Eternity and Cocktail Harry. And if you have the right script, Sarah is also available to direct television commercials. 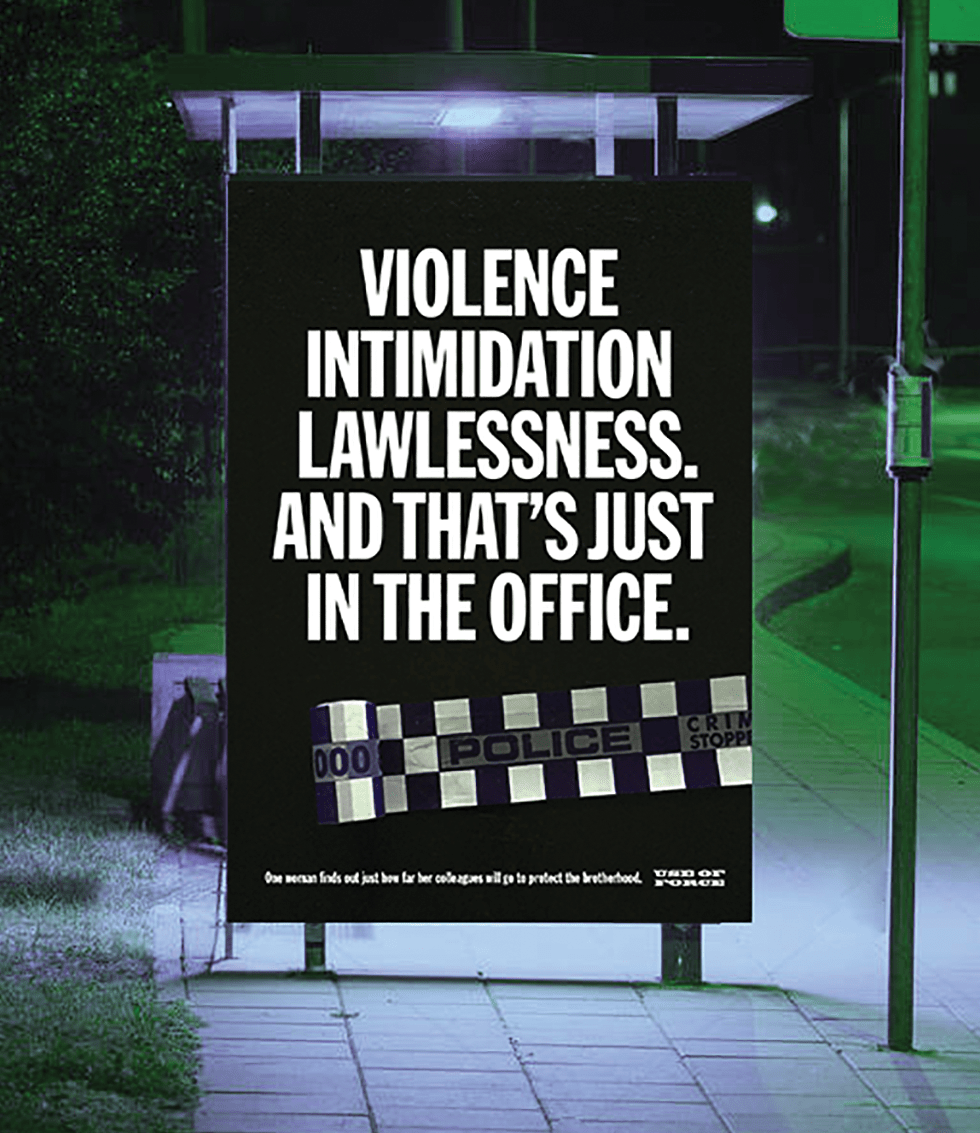 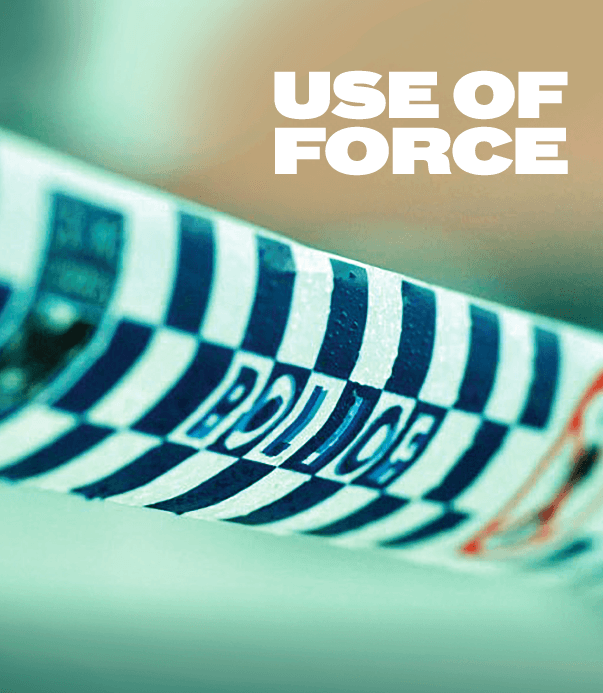 Use of Force is the story of a young woman on the front line of crime, violence and dysfunction on the hard streets of western Sydney during the brutal Royal Commission into police corruption. Based on a true story, it is a confronting insight into the violence, intimidation and lawlessness of the brotherhood under siege. Where the daily risks of violent offenders at the epicentre of Australian criminal activity were nothing compared to the dangers lurking within the organisation. A story of law enforcement officers routinely breaking the law to maintain the power and authority of the brotherhood. Where female victims of crime were callously let down by the force with devastating results.

Use Of Force is unabashedly about the female perspective, the nature of corruption, and the corrosive trauma of working in a toxic, hierarchical, hyper-masculine workplace. 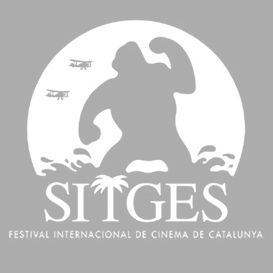 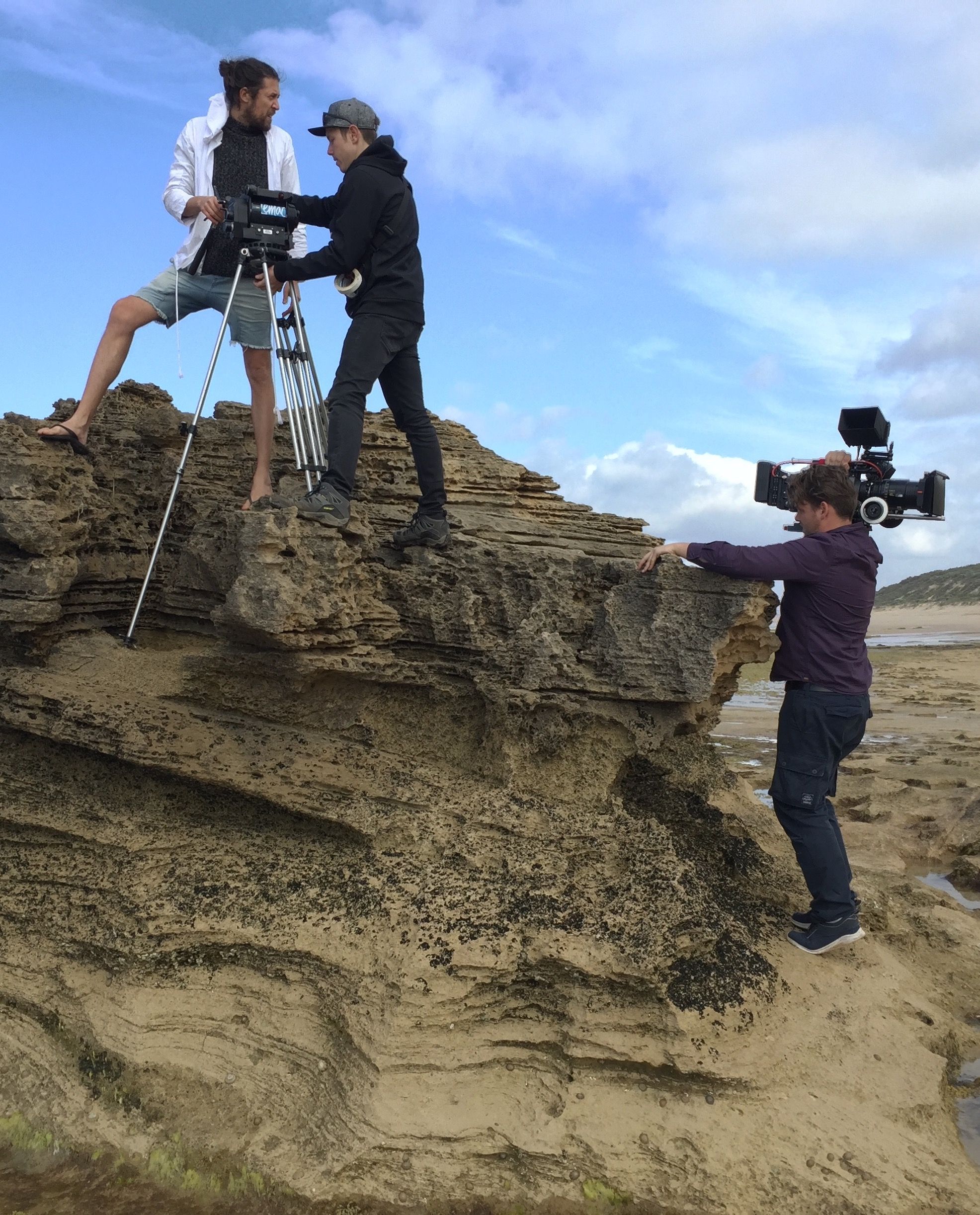 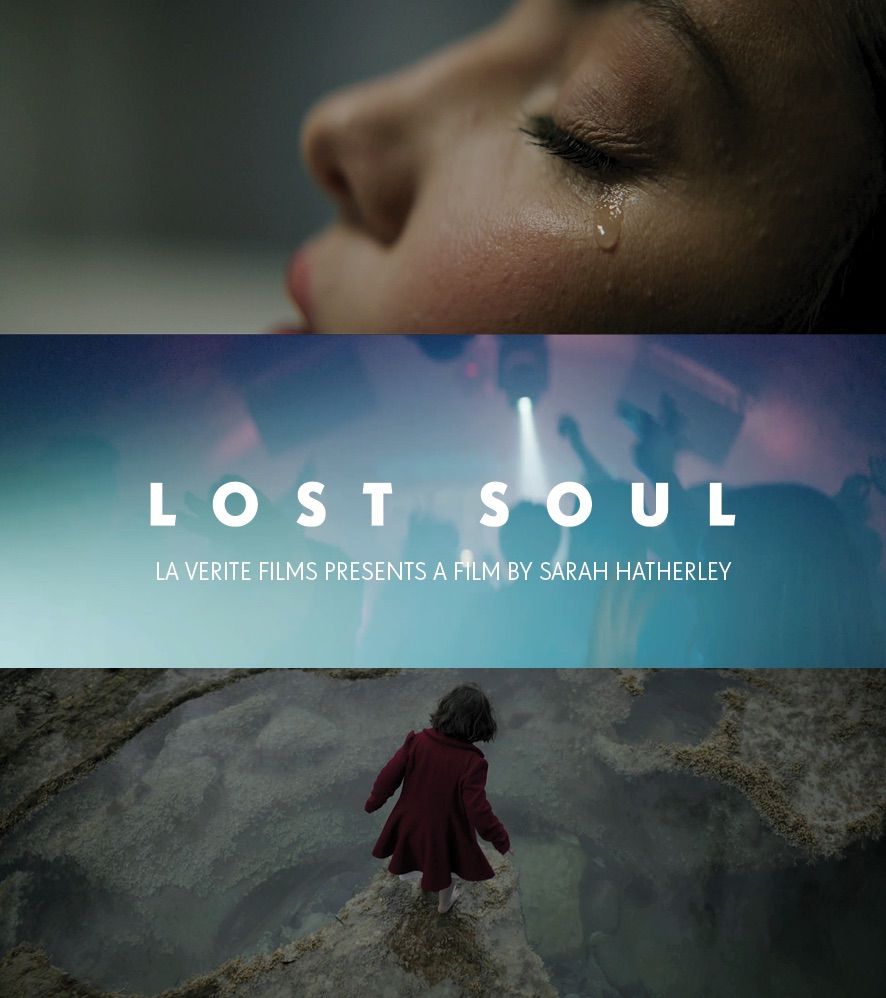 Shot on location across Victoria, Sarah teamed up with cinematographer Joel Betts to capture the scale and intimacy of the unfolding drama of Lost Soul. With a brooding score by Malcolm McDowell and deft editing by Tim Parrington, the results are breathtaking. Tony Rogers helped pull together an extraordinary crew for the cinematic short, sharing the producing load with Sarah.

Laugh out loud comedy, The Birth premiered at Tropfest

Just 6 weeks in gestation, from conceiving the idea to delivering the film The Birth was written, directed and edited by Sarah. It also screened at Holly Shorts in LA before securing international representation. Working with producing partner Tony Rogers to assemble a brilliant crew, including cinematographer Liam Gilmour, Sarah cast the marvelous Marg Downey as the unsuspecting midwife caught up in a home birth gone wrong. Dana Miltins gave a horrifyingly realistic performance delivering up comedic gold with the hapless father-to-be Glenn Maynard. 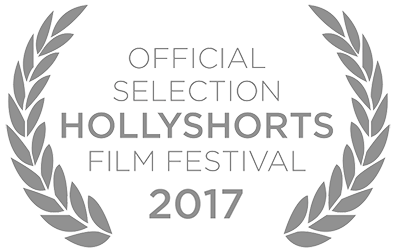 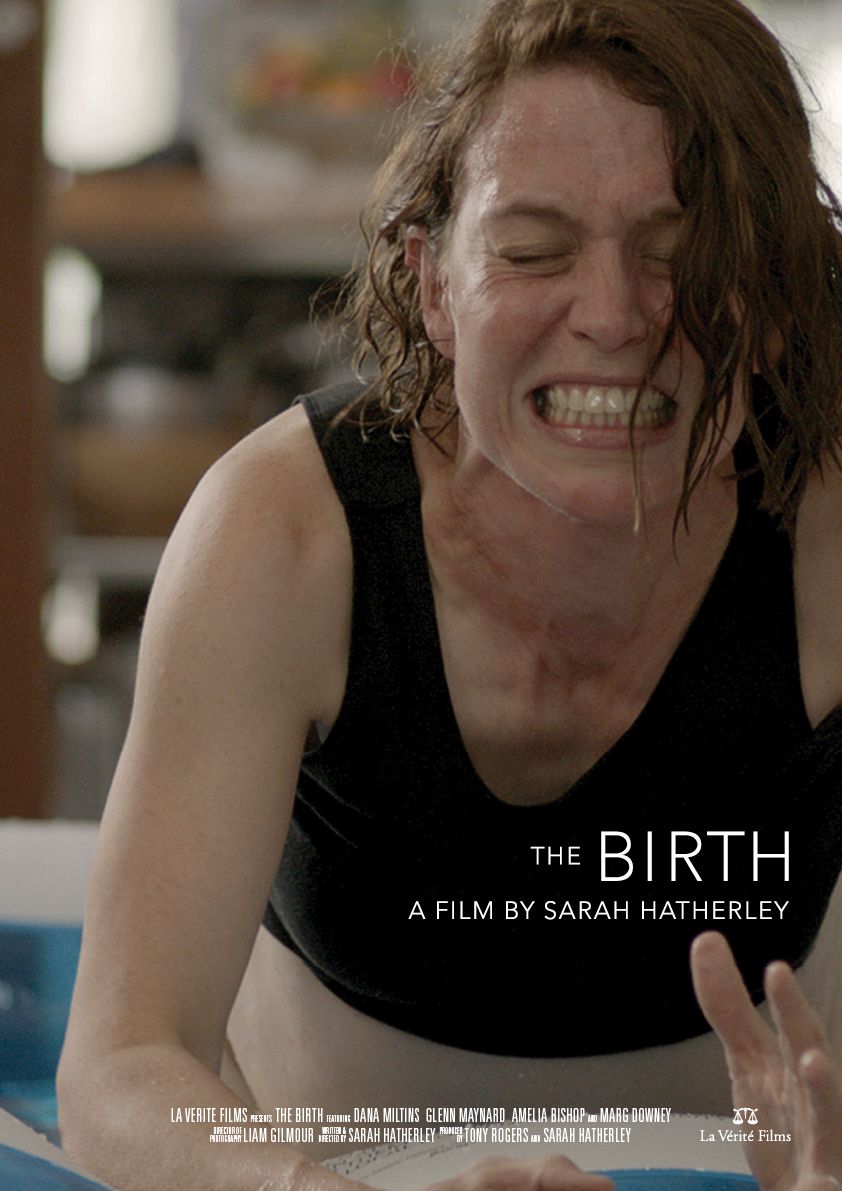 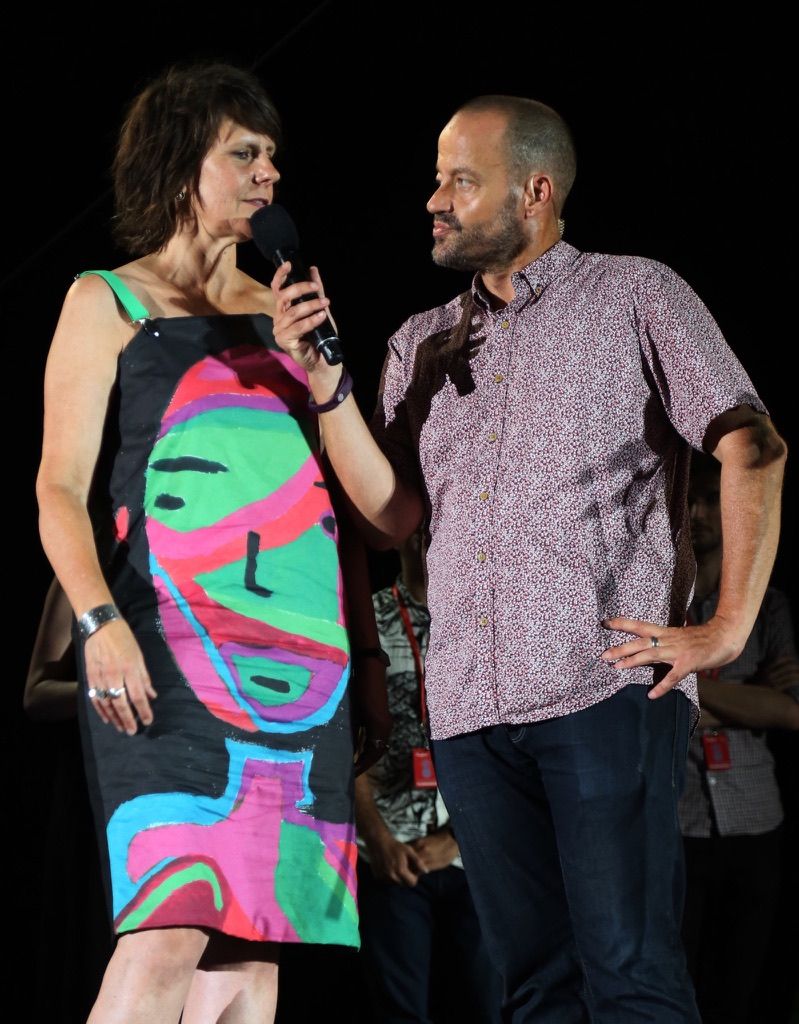 Hatherley on stage with MC Adam Spencer at Tropfest.

When an optimistic couple (Glenn Maynard and Dana Miltins) embark on a natural water birth, the birthing plan quickly goes out the window as unexpected complications develop for our new mother.

Dana Miltons in The Birth

Sarah joined forces with the talented cinematographer Sky Davies to shoot a high end trailer for her feature film Hunted (previously titled Domestic). Designed to assist in attracting marketplace interest and demonstrate Hatherley’s desire to connect deeply with audiences, the trailer has already opened many doors and opportunities. The power and the passion for female driven screen stories that reveal a different world view, has caught the attention of an industry always searching for the next big thing. Sarah believes the female lens provides a captivating twist on every genre. 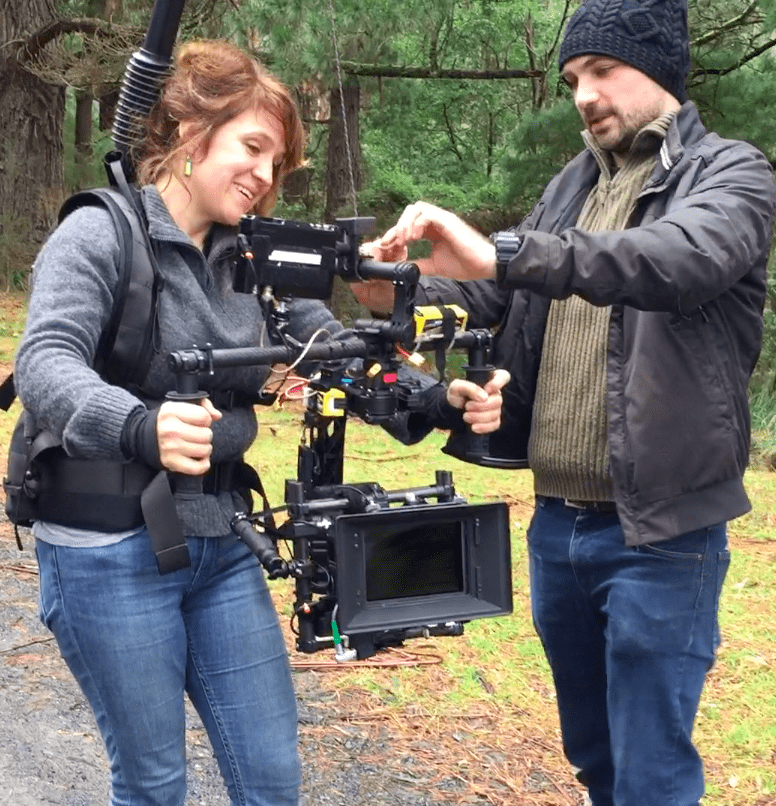 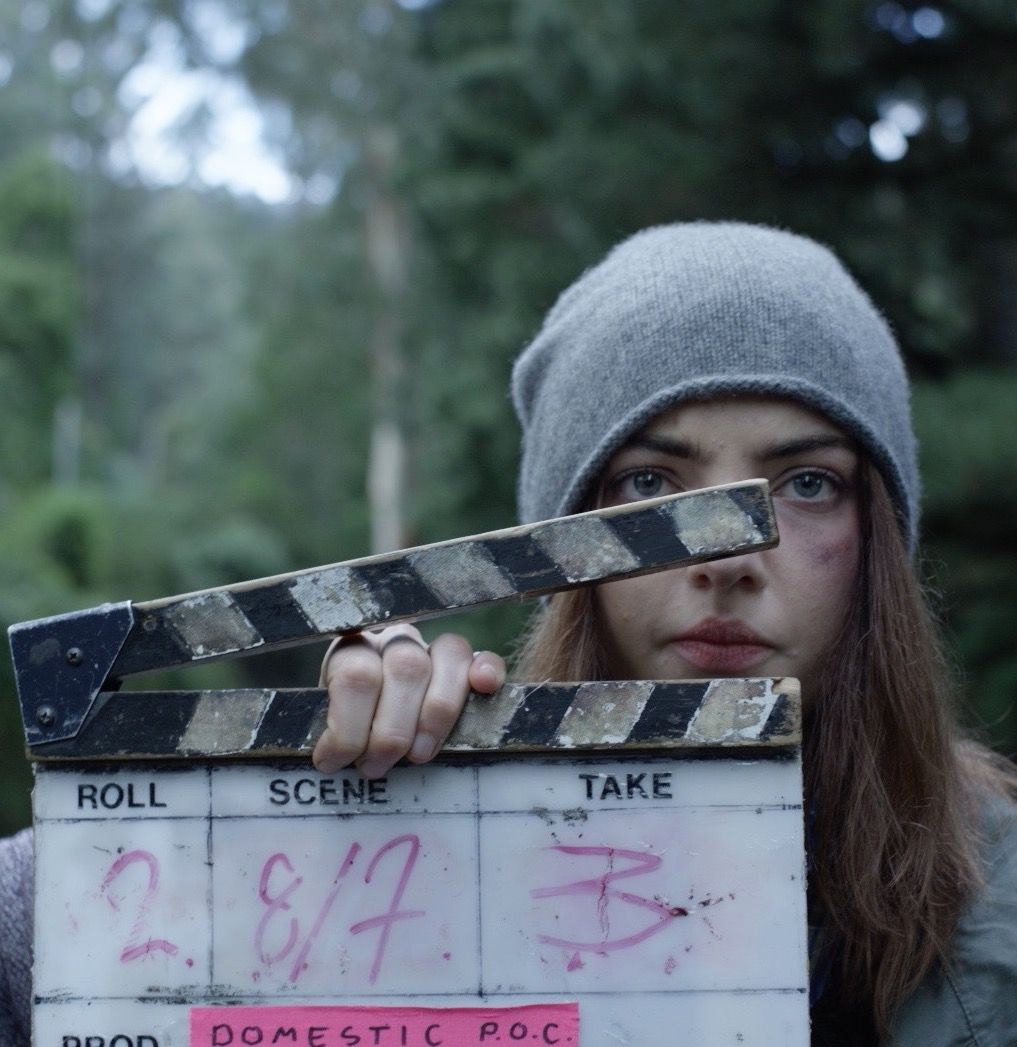 Getting behind female directed feature films

It’s never been more difficult to make a feature film in Australia. Changing screen habits and the rise of the streamers has coincided with the growing dominance of Hollywood blockbusters capturing cinema going audiences. Female directed screen stories still represent less than 17% of Australian feature films. A figure that hasn’t budged for decades. So, why persist against the odds? Seeing ourselves on screen, hearing our unique stories, launching the careers of local actors and talented film technicians, is why. The cultural dividends of a vibrant local screen industry have long been recognised. By making Hunted Sarah hopes to break down entrenched gender barriers and contribute to the debate about violence against women.